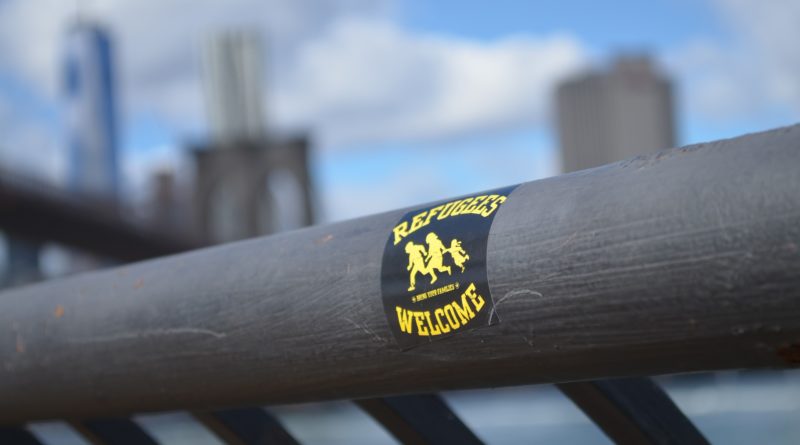 The following article was written as the leader column for the Winter 2015 edition of The Edge – the Diocese of Edinburgh’s quarterly magazine.

Someone sent me a cartoon entitled, ‘The Moderates are Protesting’. It shows people waving placards and their leader, addressing them through a megaphone, askes, “What do we want?” “Gradual change!” comes the reply. “And when do we want it?”; “In due course!”

There are radicals and activists aplenty in our diocese but I suspect that many of our members would think of themselves as fairly moderate in their political views. It takes a lot to get us roused and, politically speaking, we prefer a quiet life. This is why the reaction to the refugee crisis in Europe has been so significant. It has not been the ‘usual suspects’ (welcome though they are) leading the charge; all sorts of people have responded from the heart. They have not needed pictures of dead children to stir their compassion. ‘What are we going to do about this?’ they ask.

If this is true of our diocese, I dare say it is more generally true of the population at large. I hope the UK government is listening because their response to this major humanitarian crisis seems paltry. Twenty thousand refugees by 2020 translates into 4000 a year and 400 a year in Scotland. These people will come from refugee camps in the Middle East. Whilst one can see the logic in this, yet it does nothing to address the huge issue of migration.

Save the Children tells us that this year alone half a million people have embarked on the journey across the Mediterranean (many of whom are unaccompanied children). Surely, in the face of this, Britain can do better.

The task of welcoming refugees falls to local authorities, and they have to be hard headed about the practicalities. Offers of spare rooms (and even spare homes) are laudable, but local councils have a duty of care that requires rigorous scrutiny of the situations already traumatised people are being offered and careful preparation and training of those whose offers of hospitality may be accepted.

On the other hand, whilst most of us will not find ourselves with Syrian lodgers, all of us must reflect on what it means for our community to welcome refugees. We have not always been good at reaching out to strangers, those who do not share our faith of our language. horror stories abound, moreover, of the indignities suffered by asylum seekers in state custody. In other words, the challenge we face is to translate our concern for the well-being of migrant people into actions that make a difference. And this means more than emoting in front of a TV screen or sending a donation to a worthy charity.

But do it we must, for our faith tells us much about hospitality and finding God in the stranger. It reminds us that we too are people on the move to a ‘better country’, wanderers on our way to God, to whom we look for acceptance and grace. Advent speaks of preparing ourselves for the One who is to come, of setting our houses in order, of expecting to be judged on the basis of how we have cared for the hungry and the destitute. And Christmas celebrates the One who sought refuge with humanity and was rejected.

There are lessons here for all of us, not just for government; and it is time that the moderates amongst us realized that this is a situation in which ‘gradual change in due course’ will not do. Indeed, the irony is that in a climate of increasing hysteria about the European Union, and ugly rhetoric about defending our borders against desperately needy people, a message of restraint, compassion, generosity, welcome and openness sounds curiously radical! It reminds us why Jesus in describing God in exactly these terms was seen as a revolutionary, and paid the price.

Looking for a church near you?
Visit our Church Directory. Contact details and service times for all churches and charges within the Diocese of Edinburgh