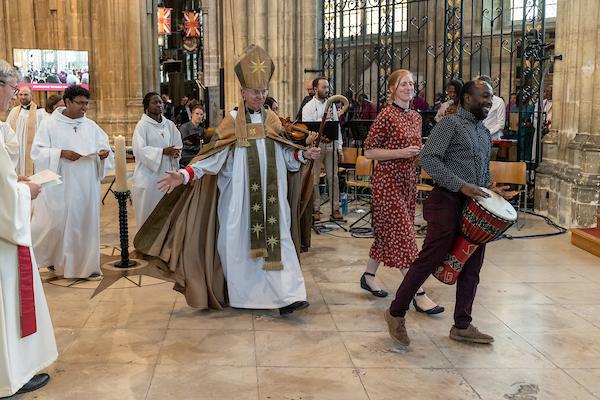 You can tell this conference is drawing to a close. Even my resolve to write every day has weakened, which is why I’m writing this early in the morning rather than late at night. And with a fire alarm still sounding in our room. Yes, we were woken at 5.30am and found ourselves out on the grass with 50 or so other bishops and their spouses. We’re unsure what caused the alarm because half an hour later we were let back in. Anyway, it gave a good send-off to Bishop Ernie, my friend from Antigua, whose early departure was accompanied by unexpected well-wishers.

The final Saturday of the Conference was a low-key affair. The proposers of the two Calls on Environment and Sustainable Development and Science and Faith may not agree, of course, but the former had had full exposure during our day at Lambeth Palace and the latter was curiously uninspiring. It was presented as if a chasm needed to be bridged between science and religion. For many of us this seemed to be an exaggeration, but I suppose the subtext was that Creationism, the rejection of the theory of evolution and the proposition that God created the world in 6 (actual not metaphorical) days – fossils and all – is harming the mission of the church. But the two calls went well together, the first affirming God as Creator and our consequent duty to care for our planet, the second proclaiming that science and yes, even scientists, are God-given and may, rightly employed, enable us both to tend the earth and love our neighbour.

Otherwise, a straightforward day. A lovely speech by Cardinal Tagle, Pro-Prefect of the Dicastery for Evangelisation in Rome, helping us to look ahead to the next decade and, at last, an opportunity, to sit quietly with friends old and new sharing ideas, offering kindness and simply enjoying each other’s company. Instead of a seminar, we opted for a ‘Latin’ evening of salsa and jazz, offered by our brilliant Conference musicians. A great end to the day, and we slept soundly until our rude awakening.

Events draw to a close today, including a service at Canterbury Cathedral. I won’t comment further (unless something really unexpected happens). But I shall attempt, over the next few days, to offer my ‘takeaways’ from the Lambeth Conference, of which there are many.