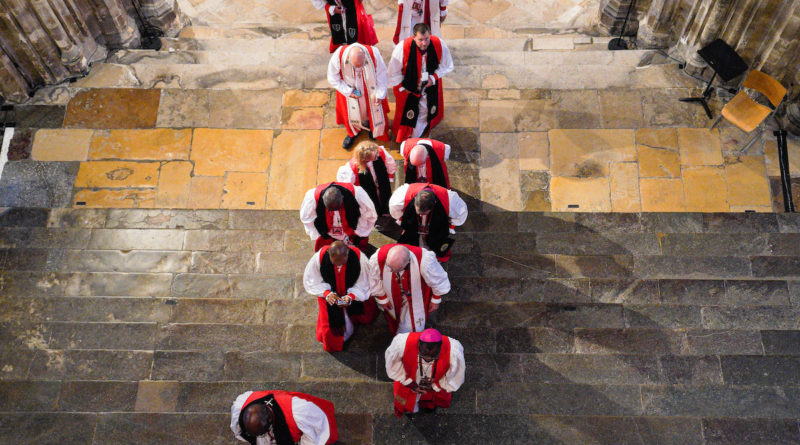 I admit, I tend to cry easily; usually when something moves me unexpectedly. I shed plenty of tears during the Conference Opening Service this morning. It was partly the sheer big-ness of the event: so many people, such amazing music and such diversity. This gathering would have been unimaginable to those few, very Victorian bishops who gathered at the first Lambeth Conference. And I daresay they might have huffed and puffed at the ethnic variety, multiple languages and, of course, all those women. Although, if some time machine could have transported them to 2022, perhaps they might have begun to feel just a tinge of pride at how things have turned out. God is still glorified amongst us, the Holy Spirit is still at work, Jesus Christ gives himself to us still in the bread and wine.

Not that everything is sorted; far from it. Yet there is something thrilling about this conference and the calibre of the people who’ve travelled here, some from war zones, others from dioceses feeling the brunt of the climate crisis, whilst holding so much in common. This event will be positively life-changing for some of us.

Tears of amazement, therefore, but also tears of sorrow for those who weren’t invited (same-sex husbands and wives), for those from some provinces who uninvited themselves and, yes, for those who opted not to receive communion with us this morning. All of us are losers.

And tears of pride for some bishops who were pressurized not to come but came anyway. For some this will prove very costly, but their sense of belonging brought them here, and their determination to offer their voice to the conversation.

In the afternoon we moved onto the second ‘Call’ – Safe Church. Thankfully, the organizers have listened to our firm feedback, that the voting buttons were worse than useless. We have now agreed the general direction of the first two Calls but asked for more work to be done on both.

I suspect the next two days will be more testing. I’m off to bed now.