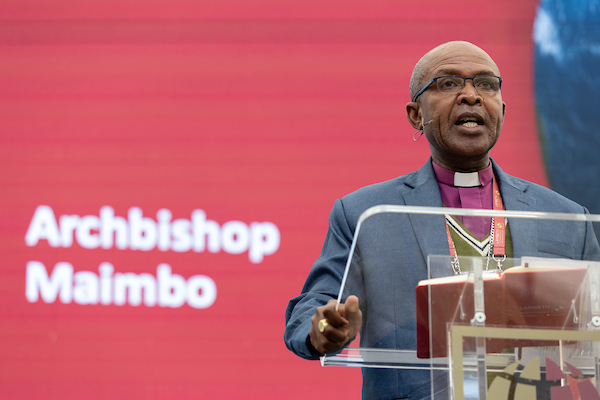 I suppose that whenever bishops gather in numbers there will be murmuring and plotting. I’m under no illusions about the schemes being hatched in dark corners of Kent University Campus and beyond. But for most of us, most of the time, the only ‘beyond’ that really matters is the one that draws us God-wards. The mood is friendly, convivial, and conversations range far and wide. Very few of them to do with the sensitive issues we’ll be tackling tomorrow.

For example, I had a fascinating conversation with a South Sudanese Archbishop this evening about the Scottish doctor and his Irish wife who brought Christianity to his diocese in the nineteenth century. Dr Kenneth Grant Fraser and Eileen, together with her sister Alice, settled in Lui and spent the rest of their lives in the village. Even to this day, children continue to be named in their honour. The archbishop is hoping to trace members of the Fraser family.

Today, at last, we began to grapple with essentials. The bible exposition focused on the idea of holiness. True holiness, emphasised Archbishop Justin Welby, comes from God not from us, and it is far more likely to push us out into a messy and hurting world than to hide us away. Purity and holiness are not the same thing. This led, in my bible study group at least, to a real, hard, challenging conversation: sexuality, culture, creation ethics, new-creation ethics.

Later in the day, we gave short shrift to the Call on Anglican Identity, but not without some highlights in the plenary. Much was affirmed about diversity and the importance of difference to our Communion. As Archbishop Maimbo of Tanzania put it, ‘Our differences, which are many, are here to serve us not to break our relationship’.