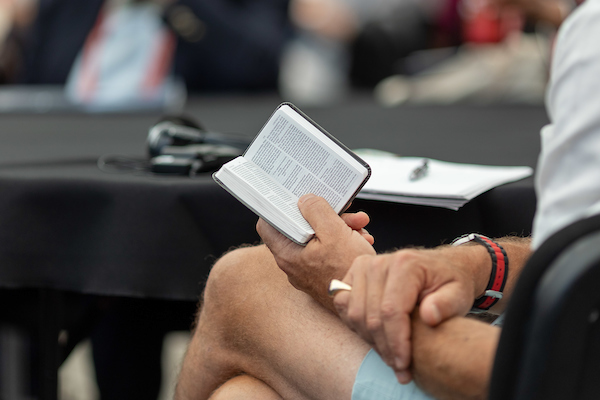 The difficult bit of 1 Peter this morning. Honouring governments, slaves obeying masters, wives submitting to husbands, that sort of thing. A passage that can only be understood in the context of the deep-rooted social habits of the first century. We are all caught up in systems that may be invisible to us, or perhaps, because of our powerlessness, be inescapable. Many of the bishops here are victims of unjust suffering from war, corruption, grinding poverty – afflictions that leave little room for socio-critique.

This bible study provided the platform on which we considered the Call for Reconciliation. Ours is a wounded Communion – a loving Communion, but wounded too. Whilst there’s much to give thanks for, the effects of the slave trade, of culturally insensitive mission and colonial arrogance leave a long shadow. There are relationships to be healed within our church, if we are to be a people who bring reconciliation to others.

All of which prepared us well for the big challenge of the day: the Call on Human Dignity. This was the moment we’d been waiting for with bated breath. Not because of the many worthy statements about the unique value of each human being but because now was our opportunity to speak about sexuality, the elephant sitting magnificently in the middle of the Anglican room. In the event, our discussion had been somewhat circumvented by a campaign orchestrated by the so-called Global South pressure group, looking to restate a conservative view on marriage. This led to a letter from the Archbishop of Canterbury confirming that the majority view of the Anglican Communion is that marriage is between a man and a woman, but that some provinces had, after faithful and careful deliberation, allowed for the blessing and marriage of same-sex couples. He backed this up in a speech to the Conference indicating that no province would be sanctioned or ostracised for following this second path.

In one sense this did all our work for us. After all, it’s not far off the solution we found in Scotland, whereby we live lovingly and respectfully with those who understand marriage differently. This now seems to be the position of the Anglican Communion.  And it paved the way for a fruitful discussion around our table in which we shared from the heart. I wish we’d had the opportunity to do this years ago. I think we’ve learned in Scotland that if you can get people who disagree in a room together amazing things can happen.

It feels like we’re in a good place. Many more miles to travel yet, but we’ve reasserted something important about the spirit of Anglicanism.