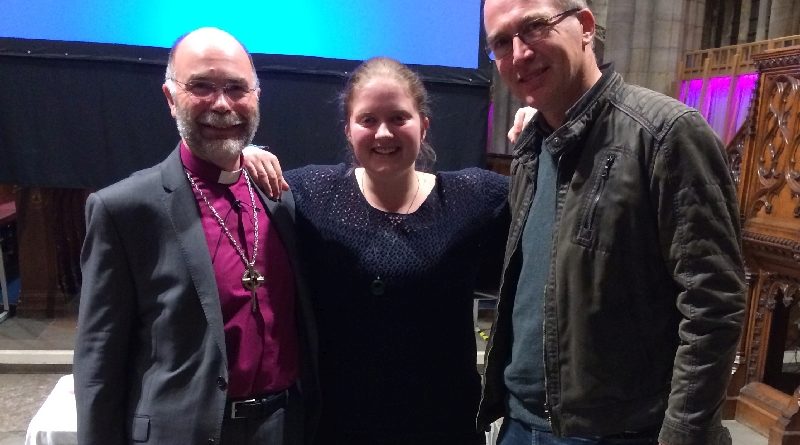 “Seek us out and let us in. Involving young people is important because we can affect your present as well as your future. We can help you prove to the world that church isn’t a thing of the past, you’re still present and growing today.” This is what one articulate young woman told our autumn Synod. Olivia Smith is a delegate at the Provincial Youth Week at Glenalmond, and one of our under-18 Diocesan representatives on the Provincial Youth Committee. She worships at St Columba’s-by-the-Castle. The Youth and Children Officer invited her to address Synod, and we were inspired by her maiden speech. Here is the text of Olivia’s address in full:

“What do you think of when you think of teenagers? For many people the thought of teens conjures the illusion of a horde of hooligans with their hoods up, smoking suspicious substances, and yelling abuse at innocent passers-by. Loud, obnoxious, definitely not the sort to take part in organised religion. However as a member of said age group I can tell you that’s simply not true.

Being a young Christian and meeting other young Christians has revealed to me an extraordinary, diverse, unique, and yet united group of people. Although there is a significant lack of teens in church there are still a lot out there who are passionate about their religion and eager to explore it. And where can one find this mythical teenager with interests and passions? Glenalmond!

The only way I can really convey to you how brilliant Glen really is, is by describing my first experience. I was, to put it mildly, highly reluctant to go. I thought that Christianity and religion in general was a mess of racist, misogynistic, homophobic rubbish (no offence, God!) I hardly ever set foot in church and the last thing I wanted was for a cult of conservative God freaks to drag me kicking and screaming back. And was that what I found? Nope. Otherwise I wouldn’t be here. The first real surprise was in house group when I was sitting awkwardly among complete strangers waiting for them to get down in their hands and knees and start singing Hail Marys. Instead what happened was when we got to talking we had a laugh, got to know each other and I was put completely at ease within five minutes of arrival. I thought it would be different when I confessed my doubts about the presence of prejudice within the church and its place in modern society. But instead of them holding up crucifixes and throwing holy water at me, they acknowledged the validity of my point and weren’t afraid to discuss it. And from there it just got better. We talked about the issues of Christianity, we were allowed to organise our own worship, and we opened ourselves up to each other, creating a bond as strong as Dwayne Johnson’s rippling biceps…but I’m getting off topic.

And that in a nutshell is the brilliance of Glen. That’s what I find every year when I return. That’s what all the other newcomers discover. This year I met a boy who told me “I didn’t expect much when I came. But Glen’s helped me at a really difficult point in my life, and I’m happier than I’ve ever been before.” And part of what makes it so brilliant are the people. If you want to know what the Glen folk are like, think of every teenage stereotype ever – they’re the exact opposite of that. Badly behaved – they’re kind and friendly. Lazy – they’re creative and active. Moody – they’re the most persistently, almost annoyingly happy people I’ve ever met, in all age groups. But it’s not the delegates who make it brilliant. The leaders have a way of getting down with us without patronising us. Equal parts responsible and childlike, always ready to provide support and always up for a laugh. The crowning glory on this is the freedom we’re given to discuss Christianity. We’re allowed to debate different issues and express our opinions, we’re even allowed to express our beliefs in our own worship. I think this shows a level of trust and respect quite unique to any other youth camp I’ve been to. This is the sort of thing we ought to do in our churches. It’s the sort of thing that could attract more youth. First of all, don’t just read the Bible to us and expect us to take it as it is. Let us discuss the messages in it and apply them to today’s situation. Let us talk about social and political issues so we can have debates and express our opinions. Secondly, let us organise worship. Okay I can see a couple of expressions going what, really? Well don’t be so sceptical. You could get lots of creative and thoughtful ideas and a fun break from the same form of service every week. It also shows a lot of trust which we really appreciate. When I first approached my minister about the idea of the young people organising a worship I was delighted with how receptive he was to the idea. And the reaction I got from the congregation who enjoyed having something different was amazing.

Yet another great thing about Glen is that it carries on being useful to the delegates even when they’re not at an event. It’s not easy having a religion when you’re a teen. When many of our peers think of churchgoers they think of the Westboro Baptist Church and gaggles of priests throwing holy water at gay people and stealing stem cells from hospitals. Having Glen is a reminder that we’re not all like that and it provides an opportunity to talk to other young churchgoers, exchange views without being judged. That for me has been very important in keeping my faith.

The spirit of Glen should be kept up, not just in church services, but in the way you approach teenagers. Whenever someone asks me “how do you talk to young people?” I just say “how do you talk to anyone?” If you want to get on with us then ask us questions, start discussions, treat us with the same respect you would anyone else. Don’t try to be down wid dem kidz. We don’t want you to be cool or relatable. We don’t care if you don’t know the latest dank memes, we don’t care if you don’t know what dank memes are. We just want you to talk to us with the same respect and consideration you would to another adult.

You shouldn’t be afraid to approach teenagers, we don’t bite! It’s important to cross the divide between youth and adults because we have at least one thing in common: the desire to live in a better world. So start talking to us about whatever issues you want: refugees, poverty, war, whatever. This way we won’t have youth issues and adult issues. We’ll just have issues that we can all address.

In conclusion, what I’m trying to say to you is: in the words of Mika; “we are not what you think we are”. We shouldn’t be made to sit by silently until we turn 18 then we can finally speak up for ourselves. We’re not a bunchy of moody, boorish Neanderthals grunting at the evolved mature adults. We’re here, we’re ready to participate, we want to speak to you, and we want to speak for ourselves. Please don’t deny us that. Keep supporting Glenalmond, be open to young people participating in church, and talk to us about what we can do to contribute. And when I say that I don’t just mean “hands up who wants to…” No. Seek us out and let us in. Involving young people is important because we can affect your present as well as your future. We can help you prove to the world that church isn’t a thing of the past, you’re still present and growing today. It’ll also create a future generation of people who are passionate about their religion and will continue to share and explore it for generations to come.”

Photo: Olivia with Bishop John and the Rector of St Columba’s-by-the-Castle, David Paton-Williams.