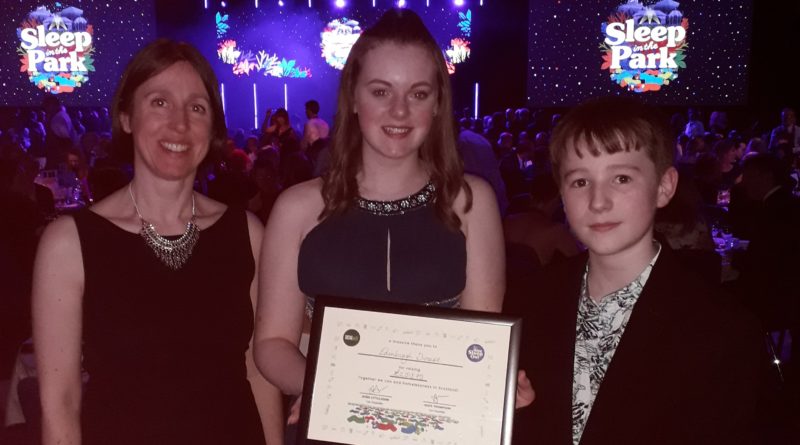 Thank you for making a difference. I’m proud of you and also inspired by you.

Malala Yousafzai, speaking to Social Bite’s Sleep In The Park and Wee Sleep Out fundraisers

“You have shown that there’s no such thing as them and us – only us.” Josh Littlejohn, co-founder of Social Bite, thanked all those who slept out in December to help end homelessness in Scotland. The top fundraisers for Social Bite’s Sleep In The Park and Wee Sleep Out events attended a Thank You Dinner at the EICC: Edinburgh Diocese was represented by Jadon Rongong and Freya Mcleman, who took part in the joint diocesan Wee Sleep Out in the Cathedral which raised £2513.75.

We heard how our fundraising has helped make the Social Bite village possible, which provides fully supported accommodation for people getting off the streets. Sleep In The Park and Wee Sleep Out fundraising has contributed to Social Bite’s Housing First programme, which has provided 830 homes for homeless people; with the money raised, Social Bite has been able to give 140,000 food items and hot drinks to people living on the streets, and to give work to 40 supported employees.

Josh Littlejohn praised the generosity of individuals and companies who have helped raise over £7.65 million over two years of Sleep Out events. He also announced exciting plans for this year: “This December we are planning to take our Sleep in the Park concept to an international stage. The aspiration is to have at least 50 towns and cities throughout the world host events, 50,000 people sleeping out, raising millions for homeless and displaced people throughout the world.” Watch this space!

The highlight of the evening was undoubtedly the guest speaker, Malala Yousafzai, in conversation with the BBC’s John Simpson. She spoke about studying Politics, Philosophy and Economics at Oxford, where she is enjoying being immersed in student life and the ordinary concerns of assignment deadlines, tutorials and social life. It seemed extraordinary that this lively, passionate young woman in front of us has survived being shot in the head by the Taliban for her advocacy of girls’ education. She talked movingly about being displaced within her own country, and becoming one of the 68.5 million people worldwide who have been displaced – the most since World War Two. She said that for displaced people and refugees, “leaving their homes is their last choice and their only choice.”

Malala spoke about her travels since resettling in the UK. She continues to visit girls who are surviving in the world’s trouble spots, in slums and refugee camps, where she hears and shares their stories. She is inspired by them, and says she learns from their resilience: these girls are taking risks, making sacrifices, even losing their homes in their efforts to continue their education. Malala has finally managed to revisit the home in Pakistan she was forced to leave, where she was joyfully reunited with friends and family. She spoke powerfully of her sense of returning home: “Just breathing that air, standing on that land…”

Malala was asked for her advice to young people: “Whatever you do matters, so believe in it and continue to do that.” To the Wee Sleep Outers in particular, she said, “Thank you for making a difference. I’m proud of you and also inspired by you.”

The First Minister, Nicola Sturgeon, responded to Malala’s inspiring words. She announced that the Scottish Government is contributing £400,000 to the continuing education of girls in Pakistan. She said that Malala reminds us all that “change is possible: we can change the world. All it requires is dedication, aspiration and hope.”

The last word goes to our own Wee Sleep Outers, Freya and Jadon, who won their place at the dinner by explaining what their involvement in Social Bite’s cause meant to them. They impressed us all with their passion for social justice, their empathy for homeless people and their commitment to making a difference. Freya said: “Listening to Malala being interviewed was very interesting because she talked a lot about other girls’ stories and not just her own. I had an amazing night at the EICC and will never forget it.” Jadon said: “I thought this night with Malala was really inspirational. I don’t know how to describe what I felt tonight. But I was really moved.”