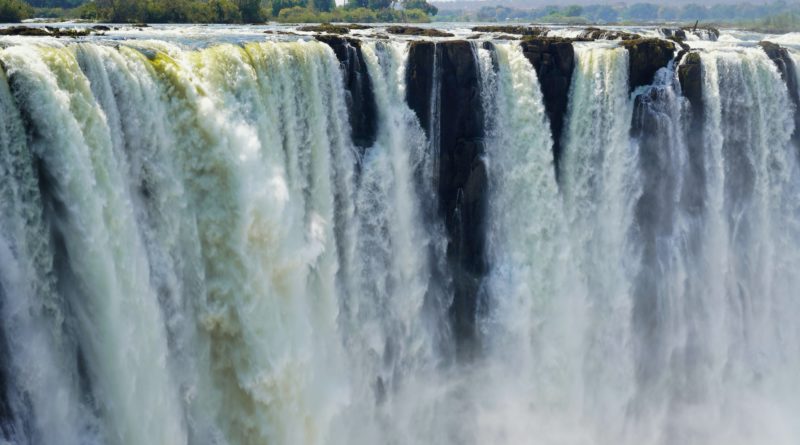 ‘The Smoke that Thunders’, ‘Mosi-oa-Tunya’ – perhaps better known to us as the Victoria Falls – is a massive waterfall on the Zambezi river on the border of Zambia and Zimbabwe. Over a mile wide, it plunges 350ft into a deep gorge, gouged out by the river itself. My visit there, as a young man, remains one of the most memorable and moving experiences of my life.

The roar of the waters, the spray thrown hundreds of feet into the air! I remember standing, in the intense heat, cooled by the spray, quite overwhelmed by the sheer volume of water hurtling over the falls. Nature’s raw power. There’s something primeval about it. I could well understand why ancient peoples told how God’s act of creation began by dividing mighty and chaotic waters so that room was made for the earth – as God controlled the uncontrollable.

When Jesus tells his disciples to put out into deep water, somehow it’s the vastness of the Victoria Falls that comes to mind. Living water, water that can frighten as well as quench our thirst, water that rushes us onwards no matter how we might resist.

Some people were talking about ‘trickle-down economics’ this week. If the rich can be made even richer, so the argument goes, the poor will get richer too. Wealth trickles down. I’ve lived long enough to be deeply sceptical of this ideology. All I can say is that God doesn’t have much truck with trickles. In God’s economy it’s deluge not trickle, abundance not meanness. It’s like comparing a drip from a leaky tap with the Victoria Falls, a garden sprinkler with the Smoke that Thunders. So, when St Paul encourages us to be ‘living sacrifices’ he doesn’t have in mind the occasional little puddle of kindness but a more substantial response to the fearsome onrush of God’s generosity.

It’s there, right at the heart of the story we tell of God. God’s self-emptying; the unknowable becoming known through a God who lives for us and dies for us. No half measures, no grudging trickle of grace but an irresistible torrent. And it’s seen not in lordship and majesty, but in service and humility. The laying aside of dignity and self-importance. ‘I came not to be served,’ says Jesus, ‘but to serve and to give my life a ransom for many.’ The word used in the Greek text for service is ‘diakonia’ from which our word ‘deacon’ derives.

Refreshingly, it’s not been economics but that word, ‘service’, that’s dominated our national discourse recently. Service, not as something menial or degrading, for it’s been used time and again to describe our late Queen. She served the country – she ‘deaconed’ the country, to use the Greek – and for her it was an expression of her Christian duty. In the church, of course, we’re familiar with all this. We speak of ministry meaning service, and our ministers are called servants of the gospel. But we don’t have to look far to discover these ideals built into our culture and our language. Civil service, health service, military service – even those who wield political power call themselves ministers. So, our Prime Minister is the main servant of state.

The point being that selfish self-interest is to be laid aside and the needs of others, especially the weakest, are to be put first. Or, at least, this is the ideal we uphold as Christians, for it reflects our desire to imitate the generosity and self-giving of God. In this sense, everyone who sets themselves to follow in the footsteps of Jesus is called to diaconal service, for Jesus served us, deaconed us, and if we are to do what he did we must serve, minister to, deacon others.

It’s what we promise at our baptism, when we are plunged into the deep, living, overwhelming waters of God’s love. In response we promise to serve others in word and deed, to work for justice and peace in all creation – which implies rather more, I would suggest, than doing the occasional good thing because we’re nice people. For St Paul, this means searching out what is ‘good and acceptable and perfect’. For Jesus, it means that the more we have the more God expects of us. ‘Put out into the deep water…’, it’s a call to each one of us, not just to the first disciples or to those being ordained, to go where our feet don’t touch the bottom, to be part of a flood, to be those who bring good news, proclaim peace and hope and who trust that God is our companion.

Janet, Val and Ross put out into deep water and look where they’ve washed up! Their ordination today is a consequence of their baptism promises, it’s not a way of excusing us from ours. An ordained deacon must serve in all the ways I’ve described, but they do so as a public figure and a church leader, helping us to see how we might serve, preparing us, empowering us, accompanying us and sending us out to love and serve Christ. Often this will involve comforting the afflicted, sometimes it will mean, as someone once put it, afflicting the comfortable.

Who knows where God will send them as they continue to sail these deep waters? We do know that, if all goes well, a year from now, the vocation Ross and Janet share will take them into the priesthood, whilst Val’s vocation is to be lived out distinctively as deacon, for we have discovered this calling to be undeniably present in who she is and how God’s Spirit works through her.

But remember, all of us share in the priesthood of Jesus, all of us share in the deacon-hood of Jesus. All of us are to pay attention to (what might be called) the vertical dimension of our faith, whereby we are gathered in community, fed in the sacraments, nourished in holiness, growing up into God; all of us are to give attention too to the horizontal dimension, whereby we are sent outwards to discover, to name and to participate in what is already holy and Godly. All of us are invited to find joy and meaning in loving God and loving neighbour. Some among us are ordained to encourage us and sustain us on the way.

There are dangers inherent in being ordained, of course. For the priest, one danger is that they become so single-minded, obsessed, inwardly focussed that they are lost in the church. For the deacon, one danger is that they are so outwardly focussed, so immersed in the world that they become lost to the church. For those called to be priests, your ordination as deacon is a gift to help you avoid the first of these dangers. For those whose life’s calling is to be a deacon, your ordination by your bishop, in the presence of the people of God, here in our Cathedral Church, is a gift to help you avoid the second of these dangers.

And for all of us, commissioned in our baptism to God’s service, deacons and priests are given to us so that we may truly be the church of Jesus, who came among us not to be served but to serve, so that the whole world might know and be inundated by the abundant, the infinite, the self-giving love of God.