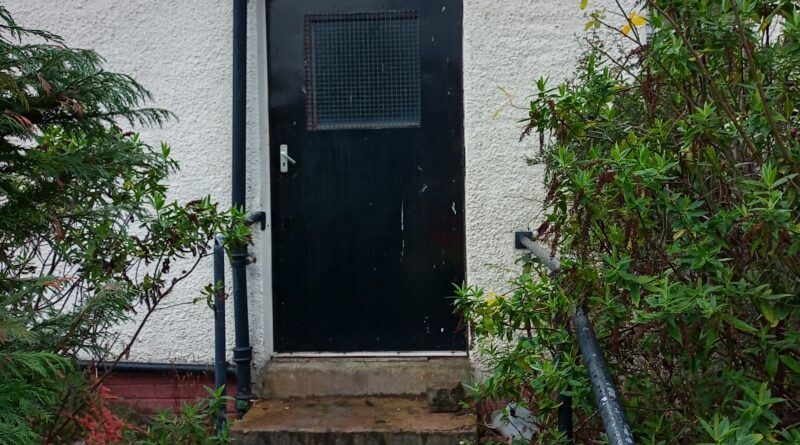 Recently our friends at St Barnabas Episcopal Church, Moredun, were visited by the Rev’d Dr Benjamin Fiore, a pastor and lecturer in Buffalo, New York. Here he describes his journey, and how he found himself worshipping at St Barnabas.

Often in our lives we are led to unforeseen places. The journey can be marked by grace and light if we have the eyes to see and the ears to hear. It was a Sunday in September 2022, and I wanted to worship and receive Christ in the community of his faithful people. So I got directions from Google Maps and followed the path to St. Barnabas’ church in Moredun, as it was near the Airbnb I was staying at in Edinburgh while on holiday. I was a stranger, an American Lutheran pastor looking for a church on the Lord’s Day. St. Barnabas’ is a humble single-storey building hidden by shrubbery, marked only by a sign indicating the name of the church and the service time.

Upon my arrival I was greeted by David, the Rector, and Philip, the musician. It was a beautiful gathering of the nine of us and an assistance dog. I was deeply thankful for this faithful gathering in this small place. A spiritual oasis in a culture and a place like so many others that seem no longer to hunger for the bread of life. Not so unlike the small town and rural churches I have served. Faithful communities of life and light often ignored by louder and less grace-filled voices.

We prayed and sang through the Scottish Liturgy. After the service I mentioned to Philip that although I serve as a Lutheran Pastor, I often feel at home in an Episcopal Church. I was baptized as an infant in St. James’ Episcopal Church in Long Branch, New Jersey. The Spirit, leading me to an unforeseen place, prompted Philip to ask me to write about my journey to ministry so that he could share it in the St. Barnabas’ magazine. So here it begins; the story of how a baptized Episcopalian 9 who was later confirmed and ordained in the Roman Catholic church, left ministry to marry, worked as a policeman and then returned to ministry as a Lutheran pastor and who found himself worshipping for a Sunday with the good people and an assistance dog at St. Barnabas’.

My family was unchurched as I was growing up. My only memory of church as a child was the smell of incense and a view of the back of the pew which was too tall for me to see over and see what was going on up front. We did have a very large family Bible at home, the kind the comes with the purchase of a set of the Encyclopedia Britannica. Since no one in the family ever picked the Bible up, and it was in a bookcase with a glass door, I thought, as a child, I was not to touch it. Thus I would sneak peeks at the family Bible and so began my religious education. It was a King James Bible, indecipherable for a kid from the Jersey Shore, but it had wonderful illustrations of many biblical scenes. I believe seeds were sown in me.

I don’t know if this is the story Philip was expecting. But the grace of God does lead us down unforeseen paths. My next encounter with church came as a young man almost out of high school. A friend and I were having beers at a bar we frequented. He was Catholic and, since it was near midnight on Christmas Eve, he mentioned that we should go to mass. After a few beers it seemed like a good idea. We drove over to St. Michael’s RC church, a cathedral like structure a few blocks from the beach and the Atlantic Ocean. The church was packed with yuletide worshippers. We arrived in the nick of time for Mass but we could find only standing room in the vestibule, which 10 was probably just as well as we were more agnostic than faithful followers at that point. Several folks more tardy than we also appeared for the midnight mass, and we found ourselves trapped between the vestibule and High Altar. Once again, I found myself in church having no clue as to what was going on upfront. After a while we were swept forward in a line – the line to receive Holy Communion. Well, when in Rome…… Thus I received my first Holy Communion on that Christmas Eve long ago. I would like to say I had a profound experience of Christ’s presence but it was more a case of my inadvertently stumbling into his presence. Or was it? Though I did not recognize Jesus in Holy Communion, I am certain now he recognized me.

I continued on the journey of life and attended Monmouth College in my hometown of West Long Branch. I became somewhat disillusioned with college, and reasoned that I could gain more education by visiting Europe. I had a friend studying in Hamburg, Germany, and a cousin studying in Naples, Italy. In between the two whom I would visit I could back-pack around Spain and develop my facility in speaking Spanish.

I had many adventures in my two months in Europe, but there is a moment that continued my spiritual formation most deeply. My cousin took me to St. Peter’s in Rome. Two images seared into my consciousness. The first was the image of the poor and crippled seated outside the walls of Vatican City pleading for alms. I was struck by the contrast that in the seat of Christianity there should be such deprivation. Then I recall entering the Basilica and viewing the statue of Saint Peter. The feet of the statue looked like someone had taken a blow 11 torch to them; they appeared formless and with little definition, almost as if they had been melted. As I viewed people touching their fingers to their lips and then touching the feet of Peter as they passed by, I realized what had caused the deformation of the statue. It struck me that if faith could melt metal, what great possibility lie in faith to do great good in the lives of people.

As I journeyed to faith in Christ and toward the church, I returned to university. I soon found myself looking through the philosophy and religion section of the university library. My attention rested upon a volume of the Documents of Vatican Council 2. I found the documents steeped in Scripture, opening me to a vision of church as light for the world leading to Christ, and the church as the people of God dedicated to the best of what society and the world could be. I began to consider a call to the priesthood but I was unchurched and not a Roman Catholic.

I continued university studies in the city of Newark New Jersey. I would walk from the railway station to my university building through the streets of Newark. I was struck by the hardness and ugliness of the city. One day, I encountered what appeared to be a homeless man approaching me on the sidewalk. We made eye contact and he asked me if I could spare a few dollars for him. He reeked of alcohol and the smell of the streets. I gave him my lunch money, and then he began to speak to me, telling of his alcoholism, of how he had wasted his life and disappointed his family, and of how he was deeply sorry. He told me his name was Francis Martin. Then he uttered a phrase that exposed the depth of my heart. He spoke of a desire in me that I had told 12 no one. He said: “You are going to be a priest.” I was taken aback by his words; we had not spoken of faith, or Christ, or church, nothing touching upon religion. I asked him why he said that to me. He replied: “Because you listened.” To listen to the Spirit and movement of God in our lives. Is that not the vocation of all the baptized?

Francis’ words have shaped my journey of faith as I strive to listen to God in the circumstances and events of my life. Francis gave me the address of his sister so that, through her, I might let him know of my progress. I did eventually become Roman Catholic, and was ordained a priest in the Sacred Heart Cathedral in Newark, not so far from the place where Francis Martin anointed me a priest in his own way.

I thank you dear reader for walking with me this far as I approach the 40th anniversary of my ordination. While I did not remain a Roman Catholic, ordained ministry has remained and anchor in faith as I continue to serve Christ in his church. I left the RC ministry to marry, and have been deeply blessed with my spouse Joanie and our three children: Joseph, Colin, and Sarah, all grown now. I spent seventeen years as a policeman. My duties included being a patrol officer, Spanish translator, detective, and hostage negotiator. I was sustained in my call to ministry by regular worship and a prayer discipline as well as ministry opportunities that were presented to me. A path back to full-time ministry was gifted to me with the Evangelical Lutheran Church in America (ELCA). I was privileged to receive a call to a small-town congregation in rural Illinois, in which I served for seventeen years as pastor. Presently in retirement, I 13 serve another small congregation, a call I received literally from members who prevailed upon me to lead worship for them until they call a full-time pastor. The exercise of tracing my journey again has been a blessing and gift for me. Blessing on the congregation of St. Barnabas’.