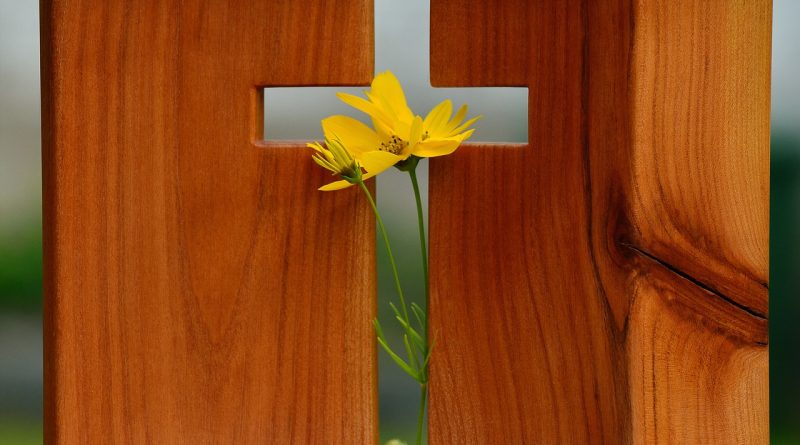 As a seven year old at Sunday School, I remember studying the story of how Jesus raises his friend from death. We went around the table, each child in turn reading one sentence. I’m afraid my interest was less in the story itself and more in how much I would get to read. To our huge amusement, my friend got only two words, the shortest sentence in the bible, ‘Jesus wept.’

Our poor teacher battled to restore order by explaining how important it was that Jesus had the capacity to cry – it showed how human he was. Our reading continued. I couldn’t believe my luck, however, when a few sentences later it was my turn to read the words of Lazarus’s sister Mary. Pointing out that her brother has been dead for four days, she says, ‘Lord, by this time he stinketh…’

I have to confess, this is where our lesson ended. The teacher had lost control and the Sunday School Superintendent, my mother, had to be very stern with us. But, looking on the bright side, we returned to Sunday School the next week eagerly looking forward to reading the bible, in the hope of finding more smelly people.

Jesus calls back to life those whom others have pronounced dead

Such are the curious and eccentric experiences that shape our faith. It was some years before I began to grasp what the story was really about. That the Lazarus story is one of several in the gospels in which Jesus calls back to life those whom others have pronounced dead. This was literally true for Lazarus, and it was true in a different sense for those who were pronounced morally or religiously beyond the pale. Socially excluded, like lepers or the mentally ill; people with ‘unclean’ illnesses or physical handicaps; or ‘sinners’ like prostitutes and heretics and foreigners and traitors. We read countless stories of Jesus noticing, touching, restoring such people, giving them back to their families, their communities; giving them dignity, identity, respectability, life – life in abundance. Jesus seems to have been someone in whom, from whom life overflowed, and whose love was never rationed or confined to the exclusive few. Today we celebrate that irrepressible energy that overcame death with life.

How our world still needs that life-giving touch!

How you and I still need it! Perhaps there are some here who live with the feeling, well camouflaged and denied yet none the less real, that deep down somehow we’re unacceptable, unworthy, undeserving. We do it to ourselves; others do it to us. The little put-downs, the subtle controls, the casual dismissals that erode our confidence, limit our boundaries, make us dance to someone else’s tune, aim lower, settle for less. Slowly stifling the life in us, anointing for burial, rolling the stone across the tomb of the life we might have lived.

If that’s true for individuals, it happens on a larger scale too. Whole groups singled out for suspicion or selected for invisibility. We’d never admit it, but it happens nevertheless, this process of taking a fellow human being and making them ever so slightly less human than us, less worthy of our care. And in the process slowly stifling the love we’re capable of.

Almost any group can become ‘less than human’

It’s a game we play a lot right now. It’s in the air. And some political leaders play along with it; orchestrate it even. Who are these suspicious groups? Depends on who you are. They might be Westerners or Europeans for some. For others they might be refugees and migrants, or Muslims or Jews or people of the ‘wrong’ colour or the ‘wrong’ sexuality or people on benefit, or… well you name it, almost any group can be a threat to someone. Almost any group can become in the mind of someone less than human, less uniquely precious, less entitled to the blessings we take for granted.

It takes this kind of mentality, doesn’t it, to explode a bomb in a busy city centre or to use a car as a murder weapon on Westminster Bridge? You have to make yourself blind to your victim, surely, insensitive to the fact that they might be someone else’s mother or husband or child. They have to take second place in your twisted thinking to a cause, an ideology.

Naturally, we might want to reassure ourselves that the tribalism of recent political campaigns doesn’t bear comparison with such atrocities, but history suggests otherwise. It suggests that thinking of others as less human than me, seeing them as a category not a person, eventually provides me with an excuse to treat them as less human than me; and in diminishing them diminish myself in the process. Roll the stone across, entomb, pronounce dead those parts of myself that are vulnerable to the needs of others.

The challenge of Easter

You see, I believe that Easter presents us with a choice, a challenge. Do we expend our energies on keeping that stone in place or do we allow it to be rolled away? Are we prepared to let the resurrection happen in us? For Easter isn’t merely something that happened long ago, one quiet spring morning in a garden. And it isn’t just a promise we live with in the hope that we go somewhere nice when we die. It is both those things, of course, and those of us here who’ve lost loved ones recently are offered this promise and this hope. But if it were only those things we might wonder why we’re in church today. No, we celebrate today and we seek God’s strength today because in our time too; past event and future promise combine to enliven our present and charge us with the energy that allows us to choose life not death.

We have a choice

When catastrophe strikes we always have a choice about how we react. We can be beaten by it and embittered, or we can allow it to be transformed into something positive. This is why the families of those who died in the Westminster terrorist attack were so impressive. Kurt Cochran’s family, for example, were devastated by his death but they weren’t overwhelmed. They stood together and celebrated that now the whole world knew what a wonderful person he was. For them, his life was so much more than his death. And they weren’t prepared to allow someone else’s atrocity to diminish their humanity. They had made a choice.

Easter invites us to be life-givers, life enhancers, life re-claimers, to let life and love have the last word in everything we do. This means refusing to allow anything to kill the humanity in us and resisting anyone or any system that degrades others. It means never being ruled by the fear that there isn’t enough love or life to go round.

Of flesh not of stone

To do this we must learn to be people of flesh not of stone. To be flesh means to feel, to bruise, to bleed and, like Jesus, to weep and to die. There’s no way round that; but then that’s the way God chose, the way in which God in Jesus became fully human, refusing to allow others to pronounce him dead.

This is God’s Word to the world: spoken in the cries of a baby on a cold night in Bethlehem, spoken to Mary early one morning in a garden near Jerusalem, and spoken to us.

This is the challenge of Easter.